Unlike for circles, there isn’t a simple exact closed formula for the perimeter of an ellipse. We compare several well-known approximations, and conclude that a formula discovered by Ramanujan is our favourite, due to its simplicity and extreme accuracy.

An ellipse satisfies that equation:

For $a=b$, we have a circle, but if $a \neq b$ the result is like a circle that has been elongated in either the horizontal or vertical direction.

The fact that these two formulae are very similar is probably not surprising.

Surprisingly, and very unfortunately, this is not the case. There is no simple exact closed formula for the perimeter of an ellipse.

Now it turns out that there are some expressions that give the result exactly, but they are typically in terms of advanced functions that are not studied until the later years of undergraduate mathematics. Specifically, the exact expression for the perimeter of an ellipse is can be written as :

where $E(\cdot)$ is the complete elliptic integral of the second kind, $_2F_1(\cdot)$ is the Gaussian hypergeometric function, and $P_{\nu}(z)$ is a Legendre Function.

Therefore through the use of specialist mathematical software, we can calculate the perimeter of an ellipse to arbitrary precision, and the compare this value to various simpler approximations.

The following expressions have been proposed over the centuries, with the last one discovered by Ramanujan.

Firstly, we note that for $a=b$, these all turn out to be exactly equivalent to $P=2 \pi a$, which is a good start. Therefore, these approximations only differ from the exact value as they become more elongated.

There are several elegant formulae which are all far are more accurate than all of the above-mentioned formulae.

An elegant one derived from Pade approximations

Note that although $P_5$ is the least accurate amongst these latter functions, it is still more accurate than the all the approximating functions in the earlier section of this post. 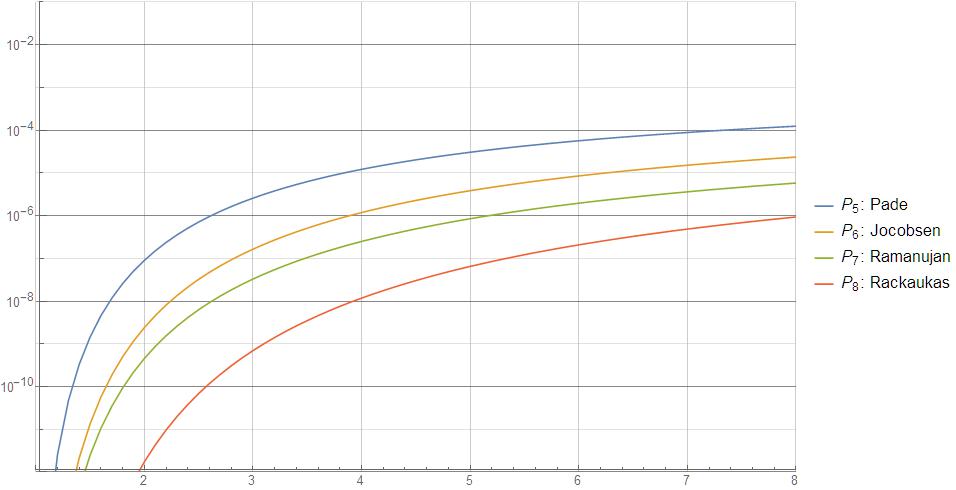 My name is Dr Martin Roberts, and I’m a freelance Principal Data Science consultant, who loves working at the intersection of maths and computing.

“I transform and modernize organizations through innovative data strategies solutions.”

You can contact me through any of these channels.

More details about me can be found here.

3 Replies to “A Formula for the Perimeter of an Ellipse”